Stephanie Otobo, the Canadian-based singer has confessed she lied against Apostle Suleman Johnson of the Omega Fire Ministries, saying that she was manipulated by some politicians.

She revealed this on Friday at Apostle Suleman’s Church in Edo state.

Recall that the she claimed Apostle Johnson Suleman had an affair with her in Canada.

According to Stephanie, she was paid heavily by some politicians to tarnish the image of the pastor in her desperation to become a popular singer.

In a video shared online, she appealed to the pastor and his wife, Lizzy, to forgive her, which they did. Mrs Suleman later prayed for her.

She said, “I came to Nigeria with a strong passion for my career and fell into the wrong hands of some powerful politicians and pastors who manipulated me in a wrong way to fault the man of God.

“They made me tell lies against him, because of my desperation for my career and I succumbed to it.

“At the time I didn’t know what was going on. I just wanted to help myself. They paid me a lot of money. 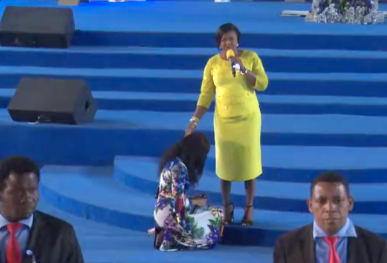