Christian leaders who have issued warnings about William P. Young’s bestselling novel “The Shack,” which portrays God as a woman and espouses universalistic beliefs, state that if the scheduled national film release is faithful to the text of the book, its distribution could “far outweigh” the harm already done to souls through the printed page. 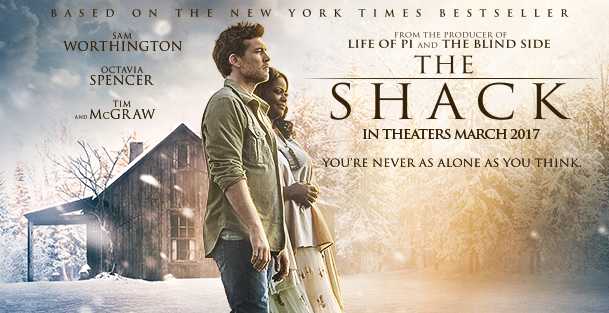 “If the film is a faithful portrayal of the events and the theology of the book, then every Christian should be gravely alarmed at the further advance of beliefs that smear the evangelical understanding of the truth of the Bible,” James B. DeYoung, author of “Burning Down the Shack: How the ‘Christian’ Bestseller is Deceiving Millions” and an acquaintence of Young, told Christian News Network.

As previously reported, “The Shack,” released in 2007, is stated to have sold approximately 20 million copies and has been translated into 39 languages. In 2013, Lionsgate Entertainment obtained the rights to turn the book into a film, which is now scheduled to be released in March 2017 and is currently being promoted nationwide.

“The Shack” tells the story of a man named Mackenzie “Mack” Phillips who faces a crisis while on a family vacation as his youngest daughter Missy is abducted and presumably killed in an abandoned shack. Years later, the grieving father receives a note from “Papa,” who tells Phillips that it has “been a while” and to meet up at the shack the following weekend.

Reluctantly, Phillips returns to the site, where he meets the Godhead, portrayed as what Young calls a “fat black woman,” a young Asian woman named Sarayu, and a carpenter named Jesus. Together, they seek to help Phillips deal with his faltering faith and to learn to forgive.

The film features Octavia Spencer as “Papa,” who is asked blatantly by Phillips, played by Sam Worthington, “Where were you when I needed you?” Sumire Matsubara plays the Holy Spirit, portrayed in the book as Sarayu.

“Young’s pretentious caricature of God as a heavy set, cushy, non-judgmental, African American woman called ‘Papa’ (who resembles the New Agey Oprah Winfrey far more than the one true God revealed through the Lord Jesus Christ—Hebrews 1:1-3), and his depiction of the Holy Spirit as a frail Asian woman with the Hindu name, Sarayu, lends itself to a dangerous and false image of God and idolatry,” Joe Schimmel, pastor of Blessed Hope Chapel in Simi Valley, California and host of the documentary “Hollywood’s War on God,” told Christian News Network.

Schimmel preached a message at his church entitled “The Shack and the Seduction of the Church,” which he is currently making available as a warning to Christians.

DeYoung says that he knew Young well prior to the book’s release, and personally witnessed Young’s slide into universalism—a belief that everyone will eventually go to Heaven, and that any punishment will only be temporal.

“In 2004, [Young] prepared and released a 103-page document for our M3 Forum in which he rejected his ‘evangelical paradigm’ and embraced universal reconciliation (UR),” he explained. “He has never renounced the particulars of universal reconciliation, [and] he refuses to say that other world religions are in error in their assessment of Jesus as the unique Son of God.”

Schimmel noted that Young has made similar statements in public interviews, denying that God will pour out his wrath on unrepentant sinners, as well as the fact that Christ took God’s wrath as the substitutionary atonement for the wicked.

“Tragically, these heresies are reflected in the aberrant fictional theology presented in The Shack. These are not mere trivial matters but strike at the very heart of God’s character and the gospel that saves our eternal souls,” he said.

Schimmel warned that such depictions, much like the children of Israel who forged a golden calf, create a god in man’s image.

“Jesus warned of a time, after His ascension, that some of His servants would conclude that He was delaying His coming and would also live wicked lives (Luke 12:45). Sadly, as we await our Lord’s return from heaven, many are guilty of fashioning images of God that they find more accommodating to their desires and chosen lifestyles and calling these gods ‘Yahweh,’” he said.

Young encouraged Christians to ask themselves key questions about the film’s content.

“My word to the viewers of the movie ‘The Shack’ is this: If they confess to be Christians, they should pay close attention to the statements made by the actors and ask themselves: Does this theology agree with the Bible and Christian doctrine? Or, is it more in line with the old distortions of the truth that Christians have identified as heresy as early as the Council of Constantinople in 533?” he said. “Contrary to UR, 2,000 years of Church history cannot be wrong.”