During an interfaith gathering at the White House, the United States President Donald Trump signed an executive order on Thursday—the National Day of Prayer—upholding religious freedom in the nation and directing departments in his administration to ensure that the rights of religious Americans are not infringed. 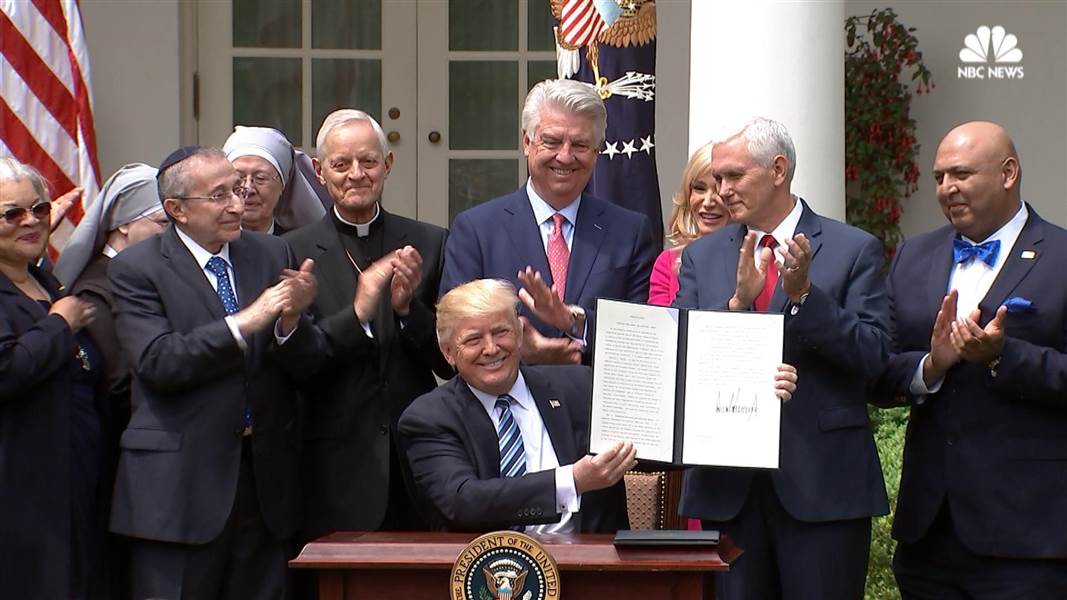 “We are a nation of believers. Faith is deeply embedded into the history of our country,” he said, delivering a speech from the White House rose garden, surrounded by various evangelical, Catholic and Jewish leaders, including Paula White, Jack Graham and Donald Wuerl.

Orthodox, Muslim and Sikh representatives also sat in the audience, and Trump advised that he would be traveling to Rome, Saudi Arabia and Israel this month—the centers of Roman Catholic, Muslim and Jewish faiths.

Trump noted that in 1863, President Abraham Lincoln called the nation’s inhabitants to prayer, fearing that Americans had become “too proud to pray to the God that made us.”

In addition to recognizing the National Day of Prayer, Trump outlined that he would be signing an executive order protecting religious freedom, which took place immediately following his speech.

“Freedom is not a gift from government; it is a gift from God,” he said. “Our founding fathers believed that religious liberty was so fundamental that they enshrined it in the First Amendment of our great and beloved Constitution.”

“Yet, for too long, the federal government has used the power of the state as a weapon against people of faith, bullying and even punishing Americans for following their religious beliefs,” Trump stated. “That is why I am signing today an executive order to defend the freedom of religion and speech in America.”

Trump outlined that his executive order will direct the U.S. Department of Justice to develop new rules to ensure that religious protections are not infringed by the federal government.

He noted that more than 50 faith-related lawsuits had been filed against the Obama administration during its eight-year tenure, including by the Roman Catholic Little Sisters of the Poor, which he called forward.

“Not only are we a nation of faith, but we are a nation of tolerance,” Trump declared. “We will not allow people of faith to be targeted, bullied or silenced any more. And we will never, ever stand for religious discrimination.”

He explained that his order also includes text prohibiting the IRS from enforcing the Johnson Amendment, which prohibits churches from endorsing or speaking against certain political candidates.

“No one should be censoring sermons or targeting pastors,” Trump said. “America has a rich tradition of social change beginning in our pews and our pulpits. … [And] we must never infringe on the noble tradition of change from the church and progress from the pew.”

“Under my administration, free speech does not end at the steps of a cathedral or synagogue, or any other house of worship,” he proclaimed. “We are giving churches their voices back. We are giving them back in the highest form.”

While some were hoping the order would also include text regarding Christian beliefs on the institution of marriage, Trump did not mention the matter during his speech.

“[T]hough we appreciate the spirit of today’s gesture, vague instructions to federal agencies simply leaves them wiggle room to ignore that gesture, regardless of the spirit in which it was intended,” he said in a statement following the signing.

“We strongly encourage the president to see his campaign promise through to completion and to ensure that all Americans—no matter where they live or what their occupation is—enjoy the freedom to peacefully live and work consistent with their convictions without fear of government punishment,” Ferris continued.

“As the president said today, ‘No American should be forced to choose between the dictates of the federal government and the tenets of their faith.’”