The Chicago Cubs made history by breaking a 108-year streak of failing to bring a World Series title home to Chicago.

Along with the World Series championship, its first in 108 years, the Chicago Cubs appear to have won a new fan: Pope Francis.

On Tuesday, roughly two weeks after the Cubs defeated the Cleveland Indians in Game 7 of the World Series, Chicago Archbishop Blase Cupich tweeted a photo of him and Francis. In his hands, the pope holds a gift of a Cubs hat and autographed baseball.

“News of the Cubs win reached all the way to the Vatican!” Cupich wrote in his post about the gift. “Pontifex can now celebrate with us and he asks for our prayers!#FlytheW” 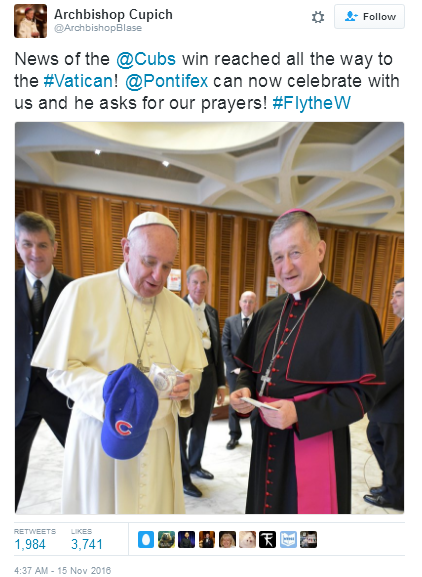 Whether Cubs fans can expect to see Francis at Wrigley Field next season is yet to be seen. Judging by the smile on his face, his holiness may well have been converted.

Cupich will return later this week to the Vatican, where he will be elevated to cardinal by Francis, archdiocese spokeswoman Colleen Tunney-Ryan told the Chicago Sun-Times.

It is unclear if Francis will opt for the Cubs hat instead of the zucchetto skullcap he usually favors.