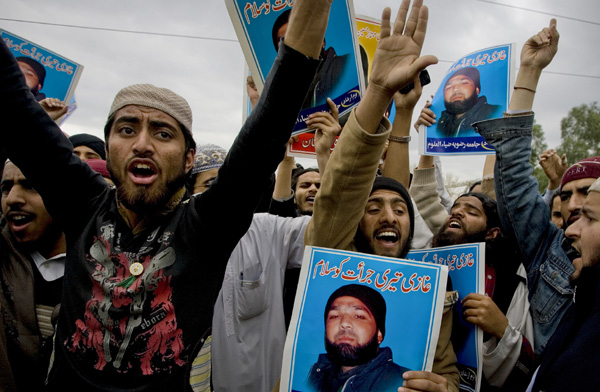 Shaan Taseer, the son of slain Punjab Gov. Salman Taseer and a human rights activist, took to social media to wish a “Merry Christmas” and to express his support for blasphemy victims Asia Bibi, a Christian mother of five who has been sitting on death row for years, and Nabeel Masih, a Christian teen who has been imprisoned since September after he was accused of “liking” a Facebook that is offensive to Muslims. The post, however, was never found.

On Friday, Taseer announced that a police case has been registered in Islampura, Lahore on the grounds of “hate speech” because of his Christmas video Message.

According to the Express Tribune, the police filings state that Taseer’s message mocked the blasphemy law and hurt the sentiments of Muslims.

As the police case registered in Islampura doesn’t mention Taseer by name, the Islamic group Sunni Tehreek Lahore has petitioned the Mughalpura police station to register a blasphemy case against Taseer by name.

“Ladies and Gentlemen, this is not satire,” he wrote on Facebook. “A case under sec 295A (hate speech: acts intended to outrage religious feelings) has been registered by Punjab Police at another Police Station in Lahore, Islampura.”

“The police claim they found a USB outside the station, opened it and were horrified by a Christmas message,” he continued. “They also claim not to know who the person in the video is (wink wink), and have therefore named an unknown person. Presumably, when asked tomorrow, they will claim to have done their job at an arm’s length basis. Once again, this is not satire, the Punjab police has moved into action to protect the public against my Christmas message.”

Additionally, The Wall Street Journal reports that a Muslim group called Tehreek Labaik Ya Rasool Allah has issued a fatwa against Taseer, saying that he is now “condemnable to death” because his message “crossed all limits of insulting God and the [Islamic] prophet.”

The WSJ reports that the group is of the Barelvi sect, which is normally considered a moderate group but takes a hardline stance when it comes to the issue of blasphemy laws.

“They have called for my assassination,” Taseer told WSJ.

“In no unclear terms, they’ve told their supporters to prepare another Mumtaz Qadri,” Taseer said, referring to the security guard who assassinated his father in 2011.

Taseer explained that he has received hundreds of hate-filled messages and death threats since posting his Christmas message and is now seeking safety outside of Pakistan.

If a case is not filed by Jan. 4, the group will stage a public protest, The Nation reports.

“Shaan Taseer in his comments has not blasphemed in any sense of the word or contravened any law,” Wilson Chowdhry, president of the London-based charity British Pakistani Christian Association, told The Christian Post on Monday. “Yet, he finds himself in a potentially life-threatening position where he could be killed by extremists incensed by the fatwa against him or arrest and detainment leading to a death sentence by statutory authorities who should be protecting him.”

“Britain and the United States have a serious decision to make whether will they continue to sponsor a country to fight terrorism whilst it exhibits more extreme ideology than the terrorists that they purport to be protecting the world from,” Chowdhry asserted.

Chowdhry added that Pakistan’s blasphemy laws are nothing more than a “tool for discrimination and persecution.”

“Asia Bibi’s incarceration on trumped-up charges are a clear example of their misuse,” Chowdhry said. “Sadly most politicians are too fearful of an Islamic backlash and despite many assurances have failed to amend or abrogate these detestable laws.”

U.S. Centers For Disease Control Is ‘pivoting’ What It Means To Be Fully Vaccinated, Director Says