Jew, Jew, cowardly pig, come on out and fight on your own 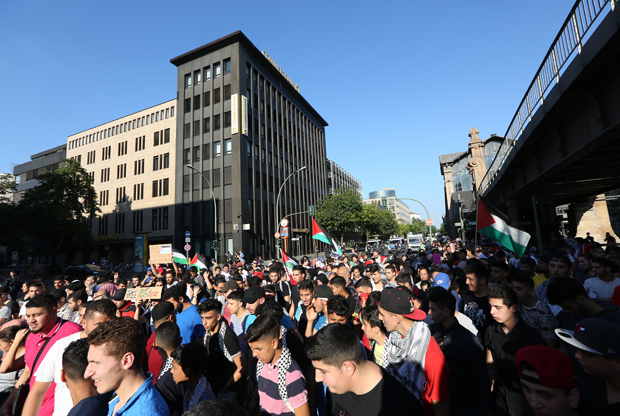 Across Europe, many pro-Palestinian rallies have been taking a disturbing turn. Under the guise of opposing Israel’s actions in Gaza, thousands of protesters have given expression to virulent anti-Jewish sentiments–and often acted on them. In France, mobs have shouted “Death to the Jews,” and eight synagogues have been attacked. One journalist even overheard a man who “spoke loudly about ‘hunting Jews and killing them.’” In the northern suburbs of Paris, the neighborhood of one of France’s largest Jewish communities was ransacked, with cars and businesses destroyed, including a kosher grocery store that was burned down.

Elsewhere in Europe, similar scenes have unfolded. In the U.K., for example, anti-Semitic incidents have doubled, with one woman being physically assaulted by pro-Palestinian marchers in London, who called her a “Jew Zionist.” But perhaps the most striking and disturbing example of this phenomenon has come out of Germany, where one would have hoped primitive anti-Semitic mobs were a relic of history.

In a video taken at a large anti-Israel rally in Berlin, hundreds of Muslim protesters can be seen chanting in German, “Jew, Jew, cowardly pig, come on out and fight on your own” (“Jude, Jude, feiges Schwein, komm heraus und kämpf allein“).