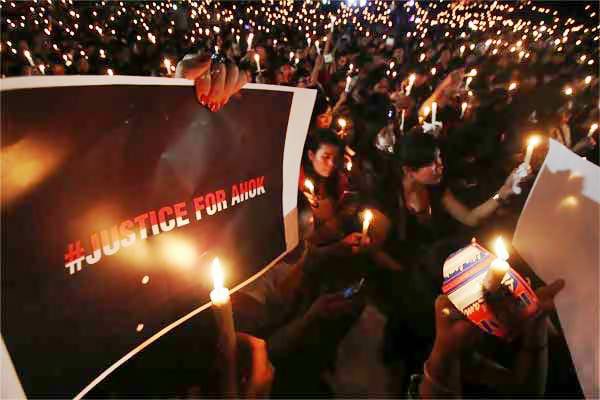 There has been flood of anger and upset in Indonesia and across the world following its imprisonment of a Christian politician for blasphemy.

Night-time candlelit vigils have been held in cities across Indonesia in support of Basuki ‘Ahok’ Tjahaja Purnama, who this week was sentenced to two years in prison on the charge of blasphemy.

Indonesians also participated in vigils across the world, in cities such as Amsterdam, Toronto and Melbourne, Australia, according to Associated Press. Many have publicised their vigils online with the hashtag #JusticeForAhok.

Ahok was Jakarta’s Christian governor until last month when he lost the latest election to a Muslim candidate.

Mass demonstrations were sparked against Ahok in September last year, when he made reference to a verse in the Quran during his re-election campaign. His opponents had used the verse to argue that Muslims should not be led by non-Muslims; Ahok said they had used it to trick people into voting against him.

Following the sentence, one judge, Abdul Rosyad, told the court that Ahok had ’caused anxiety and hurt Muslims’ and had felt no guilt.

The months of campaigns against Ahok and this week’s severe sentence have challenged the reputation of a country broadly known for its tradition of religious pluralism and moderate Islam.

The judgement was criticised by the US state department, Amnesty international, the UN’s human rights office and the UK’s ambassador to Indonesia.

Andreas Harsono, an Indonesia researcher at Human Rights Watch, previously told the Guardian the verdict was ‘a sad day for Indonesia’.

‘Ahok’s is the biggest blasphemy case in the history of Indonesia,’ he said. ‘He is the governor of Indonesia’s largest city, an ally of the president. If he can be sent to jail, what could happen to others?’

Ahok has been moved to a detention centre outside of Jakarta. His lawyers plan to appeal his sentence.

Harsono said more than 100 Indonesians have been convicted of blasphemy in the past decade and acquittals were extremely rare.