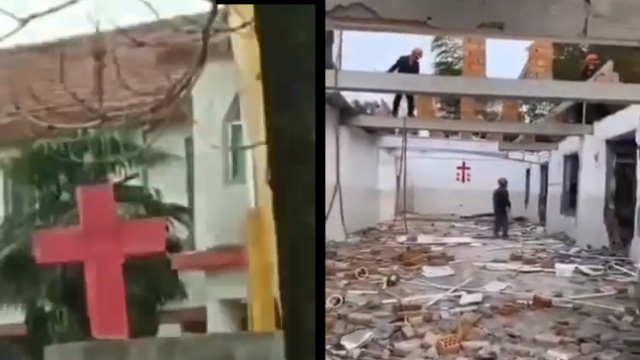 Despite the efforts in China to stop the spread of Covid-19, the Asian country authorities have not removed their policies of persecution towards the Christian community.

The Chinese communist government continued its campaign against Christianity during the country’s coronavirus outbreak by destroying crosses and demolishing a church while people were on lockdown.

The communist government has used the excuse of banning meetings to prevent the spread of the virus as an opportunity to close down, loot churches and remove any Christian symbols such as the cross of Christ.

On March 13, a church in Guoyang County, Anhui Province saw its cross removed by authorities. A video shared by the Chinese Christian Fellowship of Righteousness documented the moment when the crane removed the red cross from the church’s rooftop.

A Christian with the surname Chen told persecution watchdog group China Aid that this church usually has 40 churchgoers attending its services. Authorities used the lockdown as an opportunity to remove the church’s cross.

“Religious persecution continues even in the midst of #WuhanVirus,” Fu captioned the video. “Xiangbaishu Church in Yixing city, Jiangsu province was destroyed by #CCP govt. Cross is our Glory.”

Another church in Huaishang district of the city of Bengbu, Anhui province also had its cross removed at the beginning of March, according to International Christian Concern. Ms. Yao, a local Christian, said the removal was led by the head of the local United Front Department, a Communist Party organ employed to govern religious affairs.

Amid the coronavirus outbreak, which originated in Wuhan, China, most of the churches across the country, both underground or state-approved, are able to meet online as of now.

However, in China’s Shandong province, two state-run Christian organizations, the Three-Self Patriotic Movement and China Christian Council released a statement ordering all online preaching be ceased and churches that gather in secret be rooted out, reports China Aid.

Religious persecution continues even in the midst of #WuhanVirus March 11 Xiangbaishu Church in Yixing city, Jiangsu province was destroyed by #CCP govt. Cross is our Glory大疫当前，江苏宜兴香柏树教会,于3.11日遭到强拆.举国上下深感人民的苦难，但谁知道在十字架上那位上帝之子的苦难？ pic.twitter.com/wp35ZexYIu

In addition, it posits officials should “guide” Christians “in other ways, with the caveat of not gathering together!”

According to International Christian Concern, most churches in the country have met online since the closure began. However, there is concern that repression of these virtual meetings will begin as soon as the virus response begins to calm down.

For the past 20 years, China has been labeled by the U.S. State Department as a “country of particular concern” for religious freedom violations.

Under President Xi Jinping, the government has destroyed numerous churches and removed their steeples and crosses, reflecting the Communist Party’s concerns about the growing number of Christians in the country, according to Christian Post.

More than 60 million Christians live in China, at least half of whom worship in unregistered, or “illegal” underground churches.

China is ranked as one of the worst countries in the world when it comes to persecution of Christians on Open Doors USA’s World Watch List. In addition to Christians, the communist government continues to persecute and monitor members of various religious minorities, including the detention of over 1 million Uighur and other Muslims in western China over the last three years. In 2018, the government banned the online sale of Bibles.