Channel 12 says officials in the incoming administration have updated Israel on the deliberations, as wary Jerusalem pushes for a broader accord

Officials in the incoming Biden administration have already begun holding quiet talks with Iran on a return to the 2015 nuclear deal, and have updated Israel on those conversations, Channel 12 News reported Saturday.

The network gave no sourcing for the report, and no details on what was allegedly discussed.

US President-elect Joe Biden has indicated his desire to return to the accord, while Israel is pushing for any return to the deal to include fresh limitations on Iran’s ballistic missile program and support for terror and destabilization around the world.

On Wednesday, Walla News reported that Israeli Prime Minister Benjamin Netanyahu is assembling a team to strategize for the first talks with the Biden administration on Iran’s nuclear program.

The team will include officials representing national security elements, the Foreign Ministry, the Defense Ministry, the military, the Mossad spy agency, and the Atomic Energy Commission, the report said, citing unnamed sources in the Prime Minister’s Office. 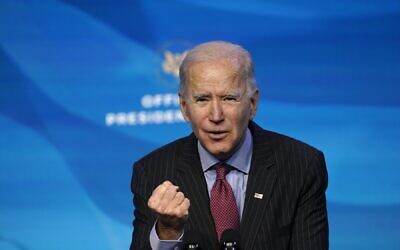 Netanyahu is considering appointing a senior official to head the team and to serve as an envoy in talks with the US on the Iranian nuclear program, the report said.

A possible candidate to head the team is Mossad chief Yossi Cohen, the report said.

Channel 12 reported Saturday that Cohen was in Washington this week to meet with officials in the outgoing and incoming administrations.

US President-elect Joe Biden is expected to take a more conciliatory approach to Iran than the Trump administration and has said that if Iran returns to the terms of the 2015 nuclear agreement, he too would rejoin, removing the crushing economic sanctions that have wreaked havoc on the Iranian economy over the past two years.

The US president-elect has indicated that he wants to negotiate more broadly with Tehran if Washington returns to the deal, notably over its missiles and influence across the Middle East. Iran has said it could welcome the return of the Americans to the agreement, but only after they lift sanctions. It has rejected negotiation on other issues.

Obama signed the agreement despite fierce protest from Israel, and had a rocky relationship with Jerusalem and Netanyahu, while the premier and Trump have been in lockstep on most Middle East policy issues.

The prospect of the US reengaging with Tehran has drawn warnings and alarm from Netanyahu and his allies.

Last week, speaking alongside US Treasury Secretary Steve Mnuchin in Jerusalem, Netanyahu warned against the US rejoining the nuclear agreement, also known as the Joint Comprehensive Plan of Action (JCPOA).

“If we just go back to the JCPOA, what will happen and may already be happening is that many other countries in the Middle East will rush to arm themselves with nuclear weapons. That is a nightmare and that is folly. It should not happen,” Netanyahu said.

Likud MK Tzachi Hanegbi said Wednesday the incoming US administration must not “appease” Iran, and warned Tehran the Jewish state will not tolerate its military presence in Syria or its development of nuclear weapons. Kedem in the West Bank on September 5, 2019. (Hillel Maeir/Flash90)

In one of the most forceful statements recently made by an Israeli official, Hanegbi, considered an ally of Netanyahu, threatened that Israel could attack Iran’s nuclear program if the United States rejoined the nuclear deal.

Iran and the Trump administration have engaged in an ongoing exchange in recent months as President Donald Trump’s tenure draws to a close and Iran marked the one-year anniversary of the US assassination of its general Qassem Soleimani.

The back and forth has included threats, military maneuvers, legal action and escalating Iranian violations of the nuclear deal. Israeli and Iranian officials have also exchanged threats in recent weeks.

Channel 12 said Saturday that during his meetings with top Trump administration officials, Mossad chief Cohen was given the impression that there was no plan to attack Iran during the final days of the administration.

Iran resumed enriching uranium to 20 percent last week, well in excess of the threshold set out in the nuclear deal and a short jump from the level of enrichment needed to produce weapons.

Further complicating the Biden administration’s plans to reengage with Tehran were two high profile assassinations this year in Iran that were attributed to Israel. Top Iranian nuclear scientist Mohsen Fakhrizadeh was gunned down outside Tehran in November in a hit Iranian officials blamed on Israel. In August, Israeli agents killed al-Qaeda’s second-in-command in Tehran at the behest of the US, according to a New York Times report.

How God Is At Work Among Imprisoned & Persecuted Christians In...