My hope is that the ‘National Bible Bee Game Show’ not only inspires young people all over the world to read and memorize God’s Word, but that they see it gives life, it heals, and transforms people wherever it goes. 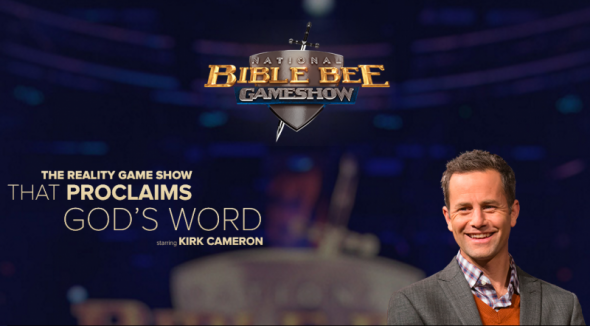 The “National Bible Bee Game Show” attracted over 1 million viewers for its season 2 premiere earlier this month, and host Kirk Cameron is hailing its success as proof that the Bible is “more powerful” than Harry Potter.
“More powerful than any book on Harry Potter’s shelf, the Holy Bible has transformed people and nations for thousands of years,” Cameron said in a press release on Monday.

“I was thrilled to host the ‘National Bible Bee Game Show’ to bring more attention to these incredible young people who have devoted so much time to scripture memorization and proclamation,” the Christian actor added.

“My hope is that the ‘National Bible Bee Game Show’ not only inspires young people all over the world to read and memorize God’s Word, but that they see it gives life, it heals, and transforms people wherever it goes.”

The game show, which premiered April 4 on Facebook Live sponsored by Museum of The Bible, reported that it reached more than 2.8 billion people, with over a million tuning in for the premiere.

“Facebook Live is the future of television. It allows us to choose our audience, pick the airtime and, most importantly, engage with the viewers as they watch this incredibly inspiring competition,” said Bobby Downes, president of Christian Cinema.

“Over the span of this show we anticipate 30 million people will tune in and for those who miss an episode, a season pass or individual episode can be purchased on-demand at ChristianCinema.com,” Downed added.

The game show tests young people’s knowledge of the Bible, and is open to competitors ages 7 to 18, who are tasked with memorizing up to 850 Bible verses in 90 days, competing for $270,000 in prize money.

“There is something special that happens when young people commit the Bible to memory,” said Steve Green, chairman of Museum of the Bible, which opens in November in Washington, D.C. “These kids are having fun and we are excited to be a part of its ground-breaking premiere on Facebook Live.”

Hannah Leary, a previous winner on the ‘National Bible Bee Game Show,’ attested that the show is not just about memorizing passages.

“It’s studying Scripture and being able to dive in deep and understand what God has to say in His Word. Our hope is that young people will be inspired to sign up for the ‘National Bible Bee Summer Study,'” added Leary, who’s hosting season 2’s panel of co-hosts along with identical twins Jason and David Benham.

Jason added, “And to do it with that level of boldness and confidence is truly inspiring.”

Cameron told The Christian Post back in March that he’s been following the show for years.

“Since the ‘National Bible Bee’ started in 2009, I’ve been a fan and supporter,” Cameron told CP. “‘The National Bible Bee Game Show’ stirs up fun, excitement and a lot of ‘intended consequences’ in homes worldwide.”

The actor celebrated the viewership news in a Facebook post on Monday, where he wrote: “Over a million people watched the premiere of the Bible Bee Game Show! Gather your kids and watch episode three tomorrow at 8 p.m. Eastern time.”