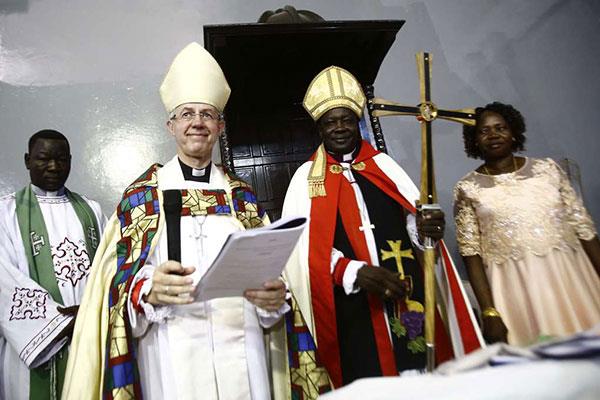 Pope Francis Visits Iraqi Christians Who Suffered Under IS

Archbishop of Canterbury Justin Welby has declared Sudan the 39th province of the worldwide Anglican Communion.

The declaration on Sunday, came six years after the predominantly Christian south gained independence from the north.

The Anglican church in Sudan, a majority Muslim country, has been administered from South Sudan since the 2011 split which followed a civil war that left more than two million people dead.

The ceremony in Khartoum added Sudan to the 85 million-strong worldwide Anglican communion’s 38 member churches — known as provinces — and six other branches known as extra provincials.

Welby said that creating a 39th Anglican province with its own Khartoum-based archbishop was a “new beginning” for Christians in Sudan.

He installed Ezekiel Kondo Kumir Kuku as the country’s first archbishop and primate at a ceremony in the capital’s All Saints Cathedral attended by American, European and African diplomats and hundreds of worshippers.

“We welcome the new primate with jubilation,” Welby announced to a cheering crowd as he handed a cross to Kuku.

Welby, spiritual head of the Church of England and of the global Anglican Communion, said it was a rare opportunity for an archbishop to declare a new primate.

“It is a responsibility for Christians to make this province work, and for those outside (Sudan) to support, to pray and to love this province,” he said.

“The church must learn to be sustainable financially, to develop the skills of its people, and to bless this country as the Christians here already do.”

The idea of a separate Anglican province in Sudan was first discussed in 2009 as it became clear that the south would secede.

“But after the split it was decided to have a separate, autonomous Episcopal Church of Sudan,” he said.

“Today, we inaugurated that. It will have its own autonomous administration to take its own decisions.”

There is no central Anglican authority such as a pope, with each member church making its own decision in its own ways guided by the Archbishop of Canterbury.

Pope Francis Visits Iraqi Christians Who Suffered Under IS

Remove US Flag From Church Altars Or Add Flags Of Other...