The adopted Dapchi girl Leah Sharibu who has refused to denounce her religion has spoken up, begging the Government to rescue her from bondage.

Recall that, on February 19, 2018, a group of female students were adopted from Government Girls Secondary School, Dapchi, Yobe state, the girls spent exactly 31 days in the custody of the insurgents. According to reports, about 110 Muslim schoolgirls were released, it was also gathered that 5 of the girls died during the course of their abducted.

Leah Sharibu, one of the students is still being held by the insurgents because she refused to convert from Christianity to Islamic religion as the insurgents demanded.

It was recently gathered that a clip of about 35 seconds, was released by TheCable as a “proof of life”. In the clip, Leah allegedly pleaded with the Government of Nigeria to rescue her from her current situation. She reportedly spoke in Hausa.

According to reports, the audio released was a recording of a teenage girl’s voice and it reads;

“I am Leah Sharibu, the girl that was abducted in GGSS Dapchi. I am calling on the government and people of goodwill to intervene to get me out of my current situation.

I also plead to the members of the public to help my mother, my father, my younger brother and relatives. Kindly help me out of my predicament. I am begging you to treat me with compassion, I am calling on the government, particularly, the president to pity me and get me out of this serious situation. Thank you”

Please continue to pray for this Christian girl who is still in the den of Boko Haram sect because of her faith in Jesus Christ.

Nigeria Ranks 14 On Countries Where Christians Are Persecuted Most, according to the World Watch List, an analysis published 2018, by Open Doors USA documenting the persecution of Christians worldwide. 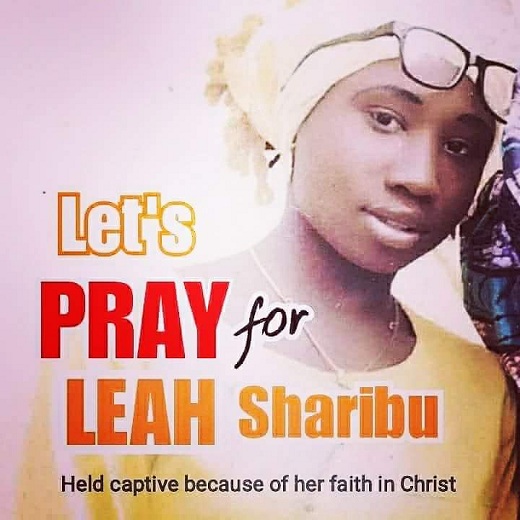