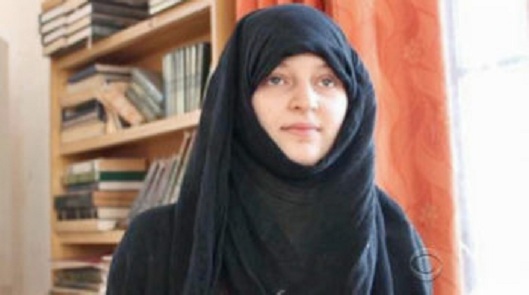 A Kansas girl taken by her father against her will to join ISIS in Syria has been freed after five years, and longs to rejoin her mother in the United States.

“I’m from Kansas and I’ve been in Syria for five years,” the young woman told CBS, which is withholding her identity because she is a minor.

Her father essentially kidnapped her. “My father didn’t tell us we were coming to Syria. When it was time to get out of the car and cross the border he was like, ‘You’re going to Syria.’

“It was a really big shock!” she told CBS.

Her father was later killed in the fighting, so she had to learn to survive on her own. She says she is a Muslim, but detests ISIS.

“We were prisoners. We were quiet. They said to shut up, stay in your house and have nothing to say. Be glad your head isn’t chopped off.”

She followed the strict dress requirements imposed by ISIS, covering herself head-to-toe in a black abaya and a niqab that masked everything except the thin slit revealing her eyes.

The teenager was forced to marry a Syrian man who was recently killed by an airstrike. Now, she is six-months pregnant with his child.

Following the deaths of her father and her husband she has been living in a mosque.

She misses her mother and says she wants to return home.

“Mom, if you see this video, please contact me,” she told CBS. She also said she misses a restaurant called the Texas Roadhouse near her home in Kansas that she remembers having good steaks.

The young woman has seen horrible sights during her captivity and may suffer from PTSD. “When you walk outside, there’s intestines on the street,” she recalled. “There’s a head cut off from the shrapnel…there’s a leg.”

The teenager dreams of being a good mother.

“I still have hope,” she said. “Hope to go to school and hope to be a normal person and to be a mother to my child.”

At the moment she is stranded in northern Syria, waiting for ISIS fighters to be fully dislodged from Raqqa.

At the end of September, about 50% of Raqqa had been totally destroyed.

This week, a group of ISIS fighters and around 400 civilians were evacuated from Raqqa under an agreement with the Syrian Democratic Forces (SDF).

On October 15th, the SDF announced the “final phase” of the battle to capture the remaining ISIS holdouts in the city.

California Pastor Raised by 3 Gay Parents Got Converted While Trying...