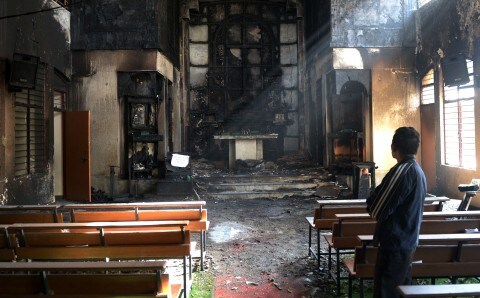 The crackdown of Christianity in India has been on the rise recently, with fresh stories of persecution of Christians every week.

Believers Portal recently shared the story of a pastor who was brutally beaten to death by Hindu extremist, but was restored to life by God.

On Sunday 18th August 2019, Layman’s Evangelical Fellowship (LEF Church) in Daman, India was also attacked by a mob of around 30 persons who disrupted the church service and beat up the congregation.

LEF Church is a registered society where believers gather every Sunday, Wednesday & Saturday, to worship at Duneta Road near Coast Highway, Daman.

Worship service commenced at 10.00 am on Sunday, when suddenly, a mob of about 30 persons, armed with lathis, gate-crashed into the premises, sloganeering and shouting abuses. They demanded that the worship service be stopped immediately. As the Church Pastor, N.M. Rao, and the congregation began reasoning with them, the belligerent & boisterous crowd began to beat every one assembled. indiscriminately. The young men were brutally beaten while the women were verbally abused with threats and vulgar words.

The brazen and daring mob, further vandalized the place, destroying Speaker Boxes, electrical light fittings, costly electrical equipment, PA System, furniture etc. They threw down the Holy Bibles and Hymn Books that were there, and trampled over them with impunity.

Finally, after the persecutors left the stunned bleeding congregation, the fearful congregation disbursed around 12.30 pm.

Speaking to Persecution Relief, Pastor recounted a similar encounter they had faced in October 2018, while they were worshipping at a rented premise. The fanatics had threatened Pastor warned the land-lord, following which, they were denied access to the flat for future meetings. The congregation had to move to a Hotel and hire the Conference Room for several months, until they built their own place of worship.

Pastor N.M. Rao is also the Coordinator for Persecution Relief, in Daman and Diu.

This is coming as a pastor in southwest Mexico was shot and killed during a church service on Sunday amid ongoing targeting of faith leaders by criminal gangs.

Pastor Alfrery Líctor Cruz Canseco was preaching from the pulpit of the Fraternidad Cristiana church in the town of Tlalixtac de Cabrera in the Oaxaca state when he was shot at point-blank range.

The attacker did not attempt to shoot anyone else and congregants were able to prevent his escape, leading to his arrest. Pastor Canseco died on the way to the hospital after the attack, leaving behind a wife and children.

Pray for Pastors Rao and Canseco, and their congregation, that their faith may not fail them; that their lives will be a living testimony in this testing time and for their protection.

India ranks tenth on Christian support organization Open Doors 2019 World Watch list of the 50 countries where it is most difficult to be a Christian.