Tearfund is working to support thousands of people both in their place of displacement and when they can safely return home with cash, clothing, water, sanitation and shelter 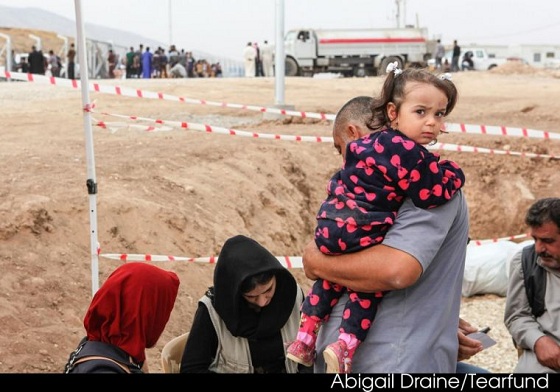 The violent recapturing of Mosul may have come to its gritty conclusion, but for hundreds of thousands of Iraqis the desperate reality of being displaced far from home is just beginning.

Tearfund is working in the region to offer immediate humanitarian assistance, including providing safe water and sanitation access, psychosocial support and cash grants, the Christian charity said in a statement.

It is estimated that since the beginning of the Mosul offensive, 920,000 civilians have fled their homes and close to 700,000 people are still displaced, with nearly half living in nineteen emergency camps.

According to the UN’s Humanitarian Coordinator for Iraq, Lise Grande, many of the people who have fled have lost everything.

She said: ‘They need shelter, food, healthcare, water, sanitation and emergency kits. The levels of trauma we are seeing are some of the highest anywhere. What people have experienced is nearly unimaginable.’

Ali and his family escaped from Mosul during the military campaign to retake the city which began on 17 October 2016.

He left behind his job as a salesman, and fled with few possessions. He and his family have set up home in an unfinished building in Northern Iraq – not by choice, but by necessity.

Ali’s story is not unusual, says Tearfund. As people fled with relatively little, they often lack the basic necessities of life and employment opportunities for displaced people are extremely limited.

Cash grants have helped them to meet their immediate needs and also are supporting the reconstruction and recovery of areas damaged in the conflict around Mosul to provide communities with access to water.

There are also further benefits for the regional economy, as money is spent on local goods and services.

Tearfund’s Iraq Response Director Betsy Baldwin said: ‘We have met many people who have lost family members, their homes and have limited ability to afford rent.

Tearfund is urging prayers for families like Ali’s who have fled their homes and lost nearly everything, prayers for healing for those who have experienced highly traumatic events and prayers for the recovery of communities, infrastructure and the economy in Mosul and across Iraq.

With the Mosul operation drawing to a close there are many thousands of people who have urgent needs and are only now able to receive assistance. There are many more thousands who are still out of reach from aid organisations, who we are preparing to assist once they become accessible.’